Inventor of ADHD’s deathbed confession: “ADHD is a fictitious disease” 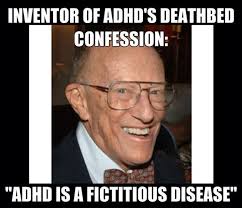 In the past week, two concerned parents have separately drawn my attention to this headline, so I thought I’d look into it…

The article in question, published by www.worldpublicopinion.org, claims that the ‘inventor’ of ADHD, Dr Leon Eisenberg, made a ‘deathbed confession’ that ‘ADHD is a prime example of a fictitious disease.’

Dr Eisenberg, who passed away in 2009, was a prominent figure in the field of child psychiatry in the 1950s and 60s. He was interested in the biological basis of child behaviour, and in developing evidence-based treatments.

Here is an excerpt from said article:

‘The alarmed critics of the Ritalin disaster are now getting support from an entirely different side. The German weekly Der Spiegel quoted in its cover story on 2 February 2012 the US American psychiatrist Leon Eisenberg, born in 1922 as the son of Russian Jewish immigrants, who was the “scientific father of ADHD” and who said at the age of 87, seven months before his death in his last interview: “ADHD is a prime example of a fictitious disease.” Since 1968, however, some 40 years, Leon Eisenberg’s “disease” haunted the diagnostic and statistical manuals, first as “hyperkinetic reaction of childhood”, now called “ADHD”. The use of ADHD medications in Germany rose in only eighteen years from 34 kg (in 1993) to a record of no less than 1760 kg (in 2011) – which is a 51-fold increase in sales! In the United States every tenth boy among ten year-olds already swallows an ADHD medication on a daily basis. With an increasing tendency.’

Apart from the very obvious use of emotive language, so tediously employed in biased offerings such as this, there are some very obvious fallacies that should be pointed out.

Firstly, to cast Dr Eisenberg, or anyone else for that matter, as the ‘inventor’ of ADHD is fanciful in the extreme. It conjures up Frankensteinian images of an eccentric professor tinkering in the basement with a child’s brain. Medical conditions occur in nature. They may be described or even renamed, but they are no more invented than the weather is invented. Dr Eisenberg himself would not have referred to himself as the inventor of the condition. ADHD has been described in the literature for several centuries before Eisenberg. Its name has changed over the years, but the essential features of the condition have not.

If one takes the time to look up the original interview with Dr Eisenberg, published in German in Der Spiegel magazine in 2012, it is immediately apparent that the doctor’s concern was around the alarming increase in both the diagnosis of ADHD and the use of stimulant medications; in short, the overdiagnosis of ADHD. I agree with him. We know that many other childhood conditions and environmental stressors can masquerade as ADHD, and when these other factors are conveniently ignored in favour of the simpler ‘ADHD’ diagnosis, then ADHD is indeed a fabricated diagnosis in that child.

But whatever the good doctor may have said, the facts about ADHD speak for themselves. To claim that it is not a genuine medical condition is simply nonsense. On what grounds do we claim that diabetes, asthma or hypertension are authentic medical disorders?

Firstly, these disorders all have a recognisable, discrete cluster of symptoms and signs which occur with relative consistency from case to case. In diabetes, for example, excessive thirst and passing lots of urine are characteristic symptoms. Similarly, the symptoms of distractibility, short concentration span, procrastination, absentmindedness and poor impulse control are hallmark features of ADHD.

Secondly, the symptoms of medical conditions cause impairment to the individual concerned. In asthma, shortness of breath can affect exercise tolerance and sleep quality, and can even be life-threatening in severe cases. In ADHD, academic underachievement, social difficulties and low self-esteem are typical consequences.

Thirdly, medical disorders have biological underpinnings which can be consistently observed from case to case. In hypertension we find raised blood pressure readings, and under the microscope there are characteristic changes in blood vessels and other organs. In ADHD, there are specific genes which have been implicated in the transmission of the disorder from parent to child. Brain changes have also been reliably demonstrated. Not only are brain volumes smaller in those with the condition, but there seems to be a direct correlation between the number of ADHD symptoms and the thinness of the brain’s cortex (the outer layer of brain cells).

If you throw out ADHD, then you must throw out asthma, hypertension, diabetes and a slew of other accepted medical conditions…which is fine if you want to live on that planet. But for everyone else, let’s concentrate our energies on something really worth debating…

How about the overdiagnosis of ADHD?

Dr Belsham is a child psychiatrist and author. His book, What’s the fuss about ADHD? is available on Amazon (click here) and through Exclusive Books (click here).